Today we saw the appearance of Domino 12 on FlexNet. That’s a bit earlier than anticipated as the Domino (and Sametime V11.6) launch event is still 11 days away. Notes & Domino 12 is an exciting new version that brings great new features both under the hood and, very visible, in the Notes client.

In the past months, I have written a series of articles about some of the new features in Domino V12:

Domino has always had a very broad support for Operating Systems. Officially only server OS-ses were supported, but it would run fine on Windows XP and Windows 7 as well. Nowadays, I always run Domino on Linux (though I had to do a IBM i-systems installation a year ago as well, which also went fine) and I’m happy to see that Red Hat Enterprise Linux 8 is officially supported and also that the use of it’s derivatives (CentOS 8 and RHEL clones like AlmaLinux and the upcoming Rocky Linux) also won’t make you lose your HCL support. Of course SUSE support is also still there, as is Windows server (2016, 2019), AIX and System i.

The most visual update to Notes 12 is the new Workspace. This is mine: 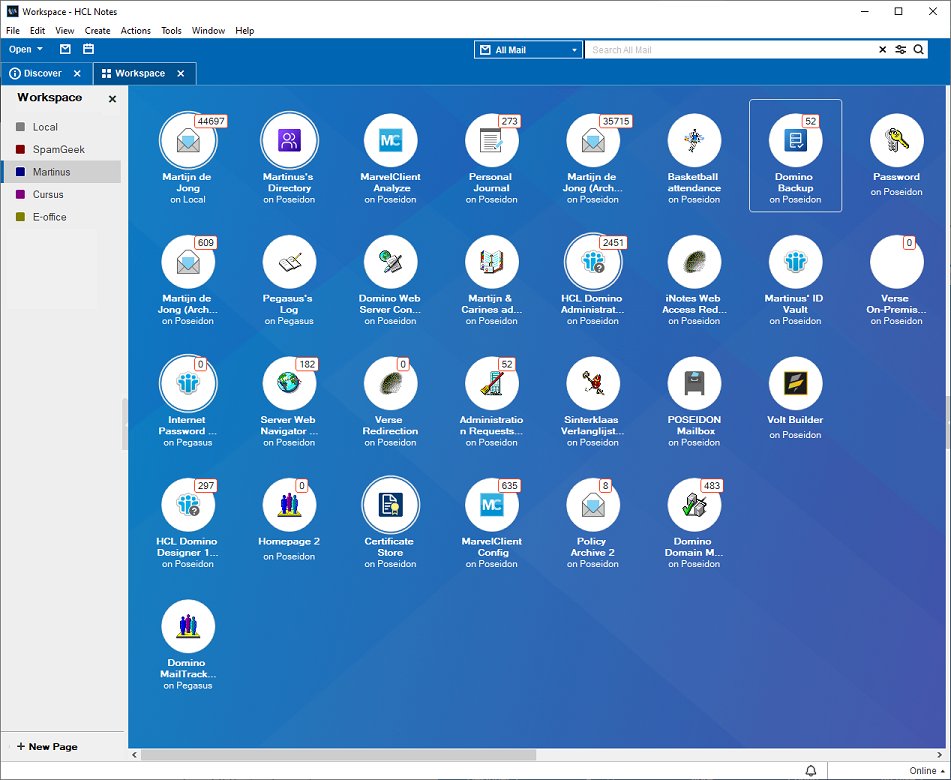 Gone are the rectangular database icons which we have had since Notes 1.0. Another very noticeable improvement is the startup speed. Notes 12 starts a lot faster than Notes 11 did! There are also improvements in the mail & calendar template and they worked on the search feature within Notes. Check out these improvements here. Another interesting development is that there’s now a 64-bit version of the Notes Basic client. There’s also supposed to be a 64-bit of the standard client, but I haven’t spotted that one on FlexNet yet. I’m curious to see what that will do in terms of speed and stability.

HCl also included some new features in Domino designer. They’ve added a new transaction method which allows you to record changes to a database. This is highly useful if you want to use Domino as a no-sql backend. They’ve also added a NotesQueryResultsProcessor class. The NotesQueryResultsProcessor can be used to create cross database views (with dynamic columns, sortings and categorization). In 12.0.0 the view data is returned as JSON. For 12.0.1 there are plans to produce „real views“ that can be opened in a Notes Client,
They also brought Formula language to Domino’s Query language. Another handy new feature is the possibility to show or hide columns based on the screen width. Other new features can be found here. A lot of interesting development however, isn’t bound to major Domino releases, but is happening in separate projects with regular releases, like the app dev pack. If you’re into Domino development, don’t forget to regularly check out that page to see what the latest versions bring!

Together with Notes & Domino V12, HCL also unveils Nomad Web. We know the name Nomad from the past as Notes on a (usb) stick. HCL revived this name for their offering of a Notes client on initially the iPad, followed by a client for the iPhone and Android. The latest offering in the Nomad line-up is a Notes client that is built using responsive Web app technology, called Nomad Web. This is not to be confused with the HCL Client Application Access client, which is a separate installer that gives you Notes basic functionality for Domino applications only. The responsive web app technology is also used for the latest versions of the Verse client (2.0+). Nomad Web is supposed to act as a Basic Notes client, which takes away the hassle of rolling out and updating local Notes clients. As rolling out and updating Notes clients has been a lot of work in many companies, this is a very interesting technology to look at. One caveat, being a basic client, some applications, in particular mail files, don’t look as good as in the standard client. Idea there is to use Verse.

Overall Notes/Domino V12 is a very interesting release. I feel this release shows HCL’s commitment to modernising the Notes & Domino platform by solving some of the biggest omissions in functionality in the IBM years through the Certificate Manager, TOTP and the Backup manager while not forgetting to keep investing in further enhancements in the area’s in which Domino was always strong. Is this a perfect release? Well, I still miss a feature where IBM also slacked when they still owned Domino: DKIM/DMARC support. In the AHA Idea Portal requests to add this support recently moved to “Planning to implement”, which hopefully means we will see this feature in 12.0.1. Fingers crossed!